Wilf Cookson was Colin’s dad. This is what Colin had to say:

My father, when he was still at school, from being about 10 or so, he used to go in, in the morning and switch the glue kettles on – 6 o’clock in the morning so the glue was heated when they came to work at 7. Because it was animal glue, it needed melting down and then it could be there to be used when they came in. Then my father started there when he was 12, til the war – he was away 6 years in the war – and when he came back after the war, he started again. And things were in a big chaos, apparently, because things had got a bit higgledy piggledy and mixed up and Mr Berry had said to me father: Can you help sort it out a bit?

And that’s where he went from there and eventually, worked his way up and became the works manager. And he retired when he was 65 as a works manager. So he worked up through the company and, of course, he knew most jobs there, because he’d done most of them. Apart from polishing. He hadn’t done any polishing, but that was a job of its own anyway, so was upholstery. But all the solvents and that used in polishing, perhaps it’s a good job – it wasn’t a very healthy side to the job, that. He was in the old mill because what we called the old mill was the only place – that WAS the mill. That old Arkwright mill was the mill until just after the war, the new place was built across the stream.

I can remember when I was a lad, some Germans coming to our house for the day and they were fitting the kilns in there that dried the wood. And my Dad had invited them back for tea, which was a little controversial at the time, because you’re talking of just after the war, really. But, you know, as my father said, he’d been in the army and the Germans weren’t the Nazis, they were different people. It was different, it wasn’t the same thing. And it was all set up then, the factory got going really, then, in the ‘50s, early 60s, they were really, really busy. They were making, like 1200 chairs a day. 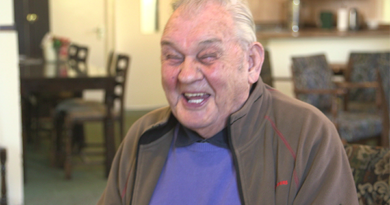