Richard Arkwright was born in Preston on 23rd December, 1732, and was arguably one of the key architects of the Industrial Revolution and was known as the father of the factory system.

He started out as an itinerant barber and on his travels, started to gather ideas about harnessing water power to drive machines that would mechanise the nascent cotton industry in Britain. He worked with a friend called Kay on what became the Water Frame: machines with rollers that would put a drag on cotton thread, all weighted and timed, to mechanically spin the thread onto bobbins. There were those that said he stole the ideas that went into his hand made, wooden prototypes.

He started licensing his machinery in 1778. This patent was a fully packaged design for a cotton spinning mill and was so expensive to license that many entrepreneurs were put off. The design included stipulations for the size of the building (52 yards by 11 yards), the number of floors, the layout and workflow (work would be carried out from the top to the bottom of the building). These mills were powered by a 10 horse power water wheel that would drive 1,000 spindles.

Arkwright was driven from Lancashire by the anger many felt towards him for making his patent so prohibitively expensive (and, many felt, for stealing the ideas behind it) and set up his first cotton spinning mill at Cromford in Derbyshire. Here, he adapted and modified his design.

“Because the processes were described in a deliberately vague way, the specification caused much litigation, which ended with the Court of  King’s Bench cancelling the patent in 1785.  Four years earlier three infringers backed down when Arkwright threatened legal action.  Nine other concerns stood firm and faced Arkwright on July 1781. ” (Chris Aspin, The Water Spinners)

So in the four years entrepreneurs were said to have “invested an estimated £300,000 in mills equipped with Arkwright’s machines and to have recruited 30,000 men, women and children to work in them.” Among those entrepreneurs were those who bought Kirk Mill in February 1785. By the time Arkwright finally lost his patent in June of that year, the construction of Kirk Mill’s cotton spinning business was almost complete and it could spin into action within weeks of the court case. 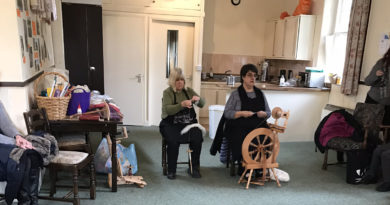