Used to make spindles and bobbins

Wolfen Hall
House, possibly Cl6th, altered 1867-8. Slobbered rubble with steep slate
roof. 2 storeys, 2 bays, with end stacks. Windows have plain stone
surrounds with wooden casements. The door, between the bays, has plain
reveals. The chimney caps have copings and weathered offsets. At the
rear is a parallel range which appears to be of a later date. Interior.
The right-hand room has, in its rear wall, a blocked 5-light tall wooden-
mullioned window with wooden lintel and sill and splayed wooden jambs.
Between the hall and the left-hand room is a timber-framed wall which
rises through the 1st floor. A main post, against the front wall of
the house, is tenoned into the tie beam at 1st floor ceiling level. The
rear wall of the left-hand room, separating it from the stair hall at
the rear, is also timber framed with many redundant peg holes suggesting
re-use or reconstruction. Between the entrance hall and stair hall is
a chamfered wooden door surround with 4-centred head. The dog-leg stair
has been reconstructed but retains its C17th handrail and moulded newel.
A stone wall, now dividing the rear wing but formerly an external wall,
has a blocked window with wooden mullions. A drawing in the Weld
collection at the Harris Art Gallery, Preston, dated 1841, shows the
house extending further to the right (north-east) where a later Cl9th
extension now adjoins. The drawing also shows a chamfered doorway with
an ogee head. This feature is not necessarily of medieval date.
Smith, T.C. History of Chipping. Preston, 1894, p. 226. 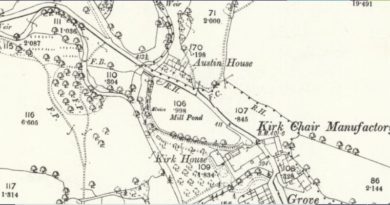