An Australian connection with Chipping chairmaking and the Dewhurst family.

A few years ago a family historian got in touch with members of Chipping Local History Society, asking for information about John Dewhurst, born in Chipping about 1859, who it was thought had descendants in Australia.

John was found on the Chipping censuses, in 1861 at Outlanehead and in 1871 at Cragg, son of Thomas Dewhurst, flymaker. This Thomas Dewhurst ran the Wolfen Mill spindle and fly works.

John hasn’t been found on the 1881 census, so unfortunately his early working life isn’t known.

By the time of the 1891 and 190l censuses, John lived in Burnley with his Scottish wife Jean and their family.

John was a chairmaker and also two of his sons, Thomas and John, once they were of working age.  Had the father, John, trained as a chairmaker in Chipping?  Had he worked for Berrys?

The story continues in Australia ……

“Dewhurst Furniture was established in 1911 by John Dewhurst.  His father also came over to work with his son from Burnley U.K. Roy and Alan, John’s sons joined the company and learnt the trade.

Since then Dewhurst Furniture has trained many fine tradesmen including the directors today. “

This firm has a long proud tradition for quality furniture. Was it founded on a bit of Chipping know-how?

Are the Lancashire Dewhursts in the picture? 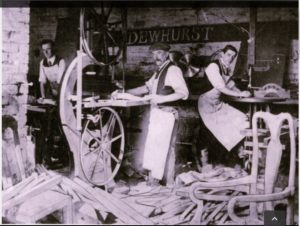