The Kirk Mill property is situated east of Chipping Brook and therefore lies in the Bowland with Leagram township part of the medieval Royal Forest of Bowland administration. This was an area of state-run cattle farms or vaccaries originating back to Celtic times and maintained and expanded under the Normans, of which the Brook was the western boundary.  The Honour (or Honor) of Clitheroe area was the part of the Forest region nearest to Kirk Mill and was the local administrative area.

“Forest” implies “Forest Law” — restrictions on the removal of timber being carefully regulated by the Forest officers.   Doesn’t necessarily imply vast forests or ample timber supplies.   By mid 1500s a survey showed that little good timber remained in Leagram. The Royals abandoned the system under Queen Eliz and the Forest of Bowland was “disforested” and privatised — private landowners took over.  eg Parkers of Browsholme.  Sherburnes of Leagram.  Those private owners planted and protected timber.

The Honour of Clitheroe admin continued with the new Lords and Ladies requiring a small payment annually. In other words, though occupiers bought and sold property like any owner — they were in fact copyholders. So the Honour of Clitheroe clerks liked to keep new owners registered and kept copies of the deeds when property was sold, as we know from some of the documentary refs for the mill.

Kirk Mill is the best Arkwright building in Lancashire, little altered and always in industrial use (until 2010) 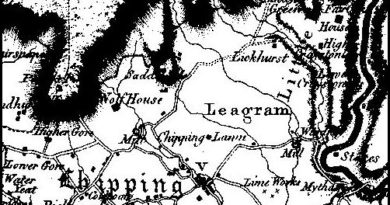 Clearing silt from the dam in the past