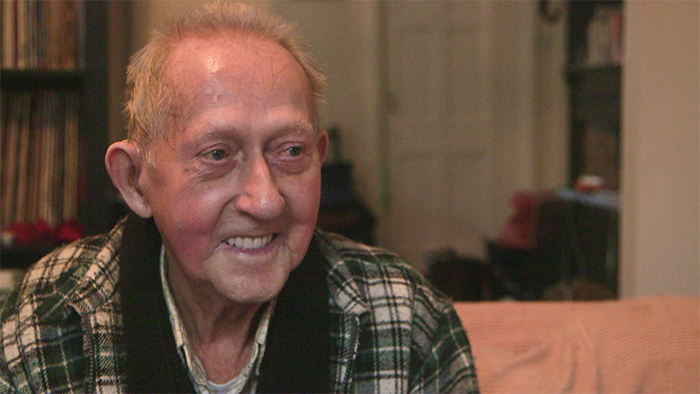 So I went up to see old John Berry – his son – and I got on! Well, I’d learnt building, with being a young lad, I used to do building with me father before I left school. So when they decided to build this, put this big saw in – they used to saw with a, what they call a bench saw. It used to move from outside. The crane lifted it on – it were an old fashioned crane before they put that big’un up. And then it went in and they sawed it inside. It were a, you know, a big round blade.

John Berry and the foreman who was in charge, they come to me one day and they said: we’re going up to Valley Saw Mills to have a look at a band mill. So I said: aye. So we went up there. Anyway, it were a big fancy one – it weren’t like ours, flippin’ ‘eck. It were automatic and everything. And John – I’ll always remember, John Berry said: We can’t afford that! No! He said: That’s too much money!

It were all brute force. No automatic or owt. That were 1947. Then I – really, at the time, our sawing was hand sawing and when they get this, they said – well, while they’re gonna start, we’ll put you with it, because you’ll be driving it when it’s finished. So I did all the moving it about – up and down, because it’s a job getting tracks, you know, in line with the bandmill saw, blade. Oh it took us weeks and weeks. Anyway, we got it finished. They dug a girt hole – it were a local bloke, come and dug big hole for us, where the bottom wheel went in.

And they made it big enough for the motor an all. An electric motor. And that big bottom wheel, with the band mill, it were 12 hundred weight, you see. It were that heavy to get speed. So when it were, when it’d get going, you see, then it had power to keep going.

You’d be sawing away … like, you were stood here, with the things at the front and the blade were just there. You know, saw, the blade were coming down here, whistling like Harry, and it were alright ‘til it hit summat – you know, summat growing in the tree. A lot of times, there’d be big lumps of metal from Banford mowing machines – Banford it had written on, you know, They must have just popped it onto the tree – I don’t know, but it finished up in the middle of it. And well, when it hit one of them, you know, there were flippin’ teeth flew off, you see. Cos the band were 36 foot long. It went right down into the floor and right up and it was a bout 36 foot, I think he said. 34? Either 34 or 36. All the teeth were bent over lie that, you know. It ripped them all off when it hit this metal. It were terrifying

And being right there, and it going that fast, well they had a brake on – you know, a big long bar. Like, as soon as one of the other lads on the other side used to run and grab hold of that and yank at it. Well, with all that weight, it took ages to stop, you know. Dangerous! I’ll always remember, once, we hit one and some of the lads used to stack pieces of wood, you know, on to pallets, for drying. And they used to work just below. And with something like that, with metal flying everywhere, you’d see them all carrying on – oooooh! And they were getting hit with some of the teeth!

Now it’s become – What is it … safety? Health and safety … aye. They had to put a screen between me and the blade, you see? To stop that flying.

They had 8 horses, you know, when I started. They still had horses.  Jim Blezard were 17 year old when he joined and he were one of the horse men. He started as young lad, with the horses.

Then he went modern, did old John Berry!

About 1934 they took that row where the shop is at the corner, at the bottom and they widened the road for the horses to come with the wood. Just at the bottom of this road. Cos they were having trouble getting round. See, it were a girt big thing, a tree wagon. You know, and they used to, when they were in the forest and that, they were up Whitewell way. They used to have what they called a 3 legged and the horses used to … they used to put three up with the rope, you know. Or two if it was a biggun. And they used to swing it round and tether horses on the back thing underneath, to load it. Three legs, what they called a three-legged – the big thing stood up with crane on, with an ordinary crane in the middle.

Steve Dewhurst worked with me when I were working the saw. He were lifting planks as they sawed. John Bretherton. They worked with me, when I was doing the saws, they worked with me, for 4 or 5 year. It were all brute force. Sometimes, you know, it was as much as I could lift when we were sawing – some of the big trees. They were massive.

During the war I met Frank Marsden. When he were in the army. We made a landing in what they call Ramree Island on Japan, that the Japanese were on. And, it’s funny, he were a transport driver and we made the landings and we were ashore one day and flippin’ ‘ell, I met him! Aye, I did! Frank Marsden. He lived just down the road. It were surprising that. Course, I were once at – one or two, you know, I met. Cookson – he were in the navy. I met him in Jim – Newfoundland. And it were just time when they were out – the Germans had decided, they had a new invention and that were guiding a bomb down by radio. They went out and it were thumping the back end. I went on board when we were on Jim to have a look at it and the last turret had gone. Blew it crying off – well it were going back to England to repair, you see. But Les Cookson were on the forward when it hit. And they found out after about them aircraft – they were that damned high you couldn’t see ‘em. And they were wirelessly bombed down, guided. And after that, well, when we were in Jim, then, abut the yanks coming to the war. And one or two cruisers and a battleship on Newfoundland, Philadelphia and all them – they said – when they were ashore, they said: oh it won’t be long, it’ll be over quick now! I said: aye, wait til tha gets out in that flippin’ med. Anyway, I think it were Philadelphia went out first. Anyway, the day after we came in and there was a bloomin’ great big hole in it.  So when we went out, we had to keep firing. We fired the pom pom, what they called a 4 barrelled pom pom. But there’s usually enough for one barrel to keep firing it up – and that upset the wireless, you see. You’d still get – they still try but they lost accuracy – they couldn’t hit ‘em. So they give up. They packed in with that. But they hit ever so many before they gave up. Aye, it were freetening!

They had a Morris Cowley wagon … they kept getting them. I don’t know, they had a mechanic, you know. They were always breaking down, were the wagons. He never bought a brand new one. It were always, you know, couldn’t afford a brand new one. He used to come, did the garage lad. I said: what is it now? He said: well, we’ve a wagon broken down since Glasgow. He says, we’ve to tow it back from Glasgow. I said OK – and we set off about 4 o’clock in the afternoon. It was dark and trying to find this damned wagon in Glasgow. Then set off all the way back. Towing, steering, ooh heck. Coming down, what is it? Where … and he’d say: well – I’ll always remember that one – he said: we’re turning up at Brock, to come through Inglewhite to Chipping, you see, so I’m watching at the junction, you know – this is about 3 o’clock in the morning. And all of a sudden, he didn’t turn. He didn’t turn and what he said he were going to do, you know, we arranged that what they were going to call the Jungle Café at Shap, you see, where we’d turn. He turned at the next beggar and I weren’t expecting him to be doing that – and I ran the back on him.

They were buying the timber from down south – aye, Windsor. Silsden. They carted it all the way from Windsor. You know, up to Chipping. And I’ll always remember, one day, this firm – Silsden, it were – but, anyway, he were a big fella what drove up this damn great – it were a big Leyland Hippo – a bloody great double track wheels at the back and, then it had this long trailer and 2 bloomin’ great tyres on the back – 2 one behind t’other. And he comes round that corner and bloomin’ smoke coming out and just at that time, the Grimsargh policeman had a little motorbike. A Bantam. A little Bantam motorbike. Followed him up, you see. And they used to go up to Tweedy’s to turn round, you see and they always come back down and get the crane, big crane and then lowered them out – it were easy to do that way. I said: what’s the matter with the policeman?

And he were about 6 foot 2, and he had a voice like a ten year old. He did sound queer, you know. He was swearing a bit you know, and apparently this policeman said: you’re overloaded. He said: how the hell do you know if I’m overloaded? And I said to the driver, you know, I said: I bet thy are overloaded. Well, he said, I am. To tell the truth, he said, I’ve 62 ton on.

62 ton then – he’d come all that way over. He said – there’s no good coming with 40 ton from Norfolk here And there weren’t motorways then, he were coming up the ordinary road.

And canteen used to make dinners with the others … it were made at dinner time and we didn’t get it while about 3 o’clock in the morning. It were stewed. It used to taste funny. 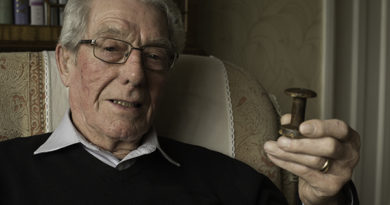