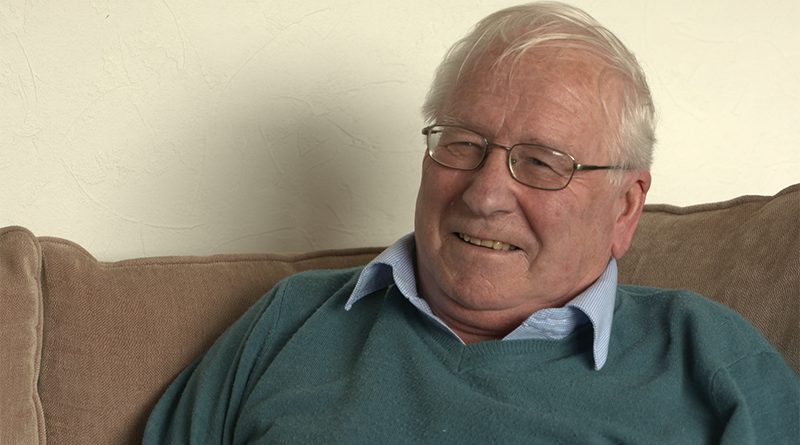 Well, I’d two brother’s working there at the time and in 1962 I was baker and confectioner with our own business in Berry Lane at Longridge and my father died in ’62 and after that I didn’t want to carry on, I didn’t want to take over the over the business, I wanted a change. So by early ’63 I decided to change my life altogether more or less. They were bringing bigger wages over, my two brothers and that, from Berry’s at Chipping, I thought I can do that, I wouldn’t mind getting into that, you know.

I went to see Mr Berry at the big house [Kirk House] and then I knocked on the door and he said “oh come on, we’ll go and have a walk” he said. So we had a walk out over the brook and up by the dam, walking up there towards, well, towards where Muriel lives I suppose. So we were talking, just general talking it were a nice interview. He was asking me why, why do you want to come here and I just explained I said well I liked doing woodwork and anything like that with my hands and also it’s a good wage, which that made him smile and so, that was sort of it, he never really…. I just sort of got the job, we came back and they just sent for me start on Monday…and that was that the next 16 years of my life, more or less. They were happy, happy days all my family were brought up then.

I might be going to the machine shop with wood work at first, but then he said will you go into the upholsterers, so,  oh, that sounds OK, that’s really interesting, just up my street. Harry Lowe were next to me, he showed me how to do a lot and Bill Armer, he taught me quite a bit as well.

Well we used to do anything up to the maximum, one chair was about 15 an hour, we used to upholster about 4 minutes apiece. They were, were they called the ‘crackerjacks’ they used to call them. And then anything down to say 8 or 10 an hour.

I still remember the numbers, they all had numbers.  869’s, 775’s, they were the tapestry ladder backs, 161’s, rocking chairs. I can’t even remember my own telephone number now but I can remember all these numbers from years ago.

They were on these staple guns, pneumatic stapler guns then. They’d just changed over from hammers and tacks, probably a year before, not much more than that. The foreman was Harold Anderson when I went there, Harold Anderson. He came from the Furness area, yea he married someone in Chipping, didn’t he?

Alan Ormerod, he was the next one, he died did Harold and Alan took over and he was there when I left in. I’d been there 16 years in 1979.

But they were struggling I could see, we made a really good wage. It was £10 a week normally and they were making about 17 or 18, so that was the difference, nearly double what everybody else, but, we were working for it really hard, you know, but the rest of the world seemed to keep catching up, but he couldn’t put the prices up and make our wages go up, because he was struggling with the imports even then, you know.

Well he used to come round did old Mr Berry. He used to come “How are you doing are you doing OK?” just like that and carry on and yea, that’s how they were, very friendly. And Jack used to be, when he came round he was flying round wasn’t he, but he’d think nothing of just coming at side of you on the bench and start doing a seat or putting screws in somewhere, he’d just join in would Jack, he was a grand bloke to work for actually. Yea, I admire him in many ways.

The pools, that’s when I realized there were at least 17 of us working there, I was trying to think how many there were. I thought there were at least 17 because I remember making 17 cheques out when we won the pools. Yea we made a syndicate 10p a week and there were 17 of us and everybody kept going down the bench, we all made it different every week and this week it was about 3 o’clock in the afternoon, I’d forgot to make it out so, I think the buzzer had gone, so I’m writing it down quick, got it away to Albert Hall.

Anyway, then on the Monday, this was a Friday, on the Monday someone came, it ed be Jack Marsh have you checked the coupon I think we’ve got 8 draws.I said “They won’t perm” He yea, they’re bound to perm we do a full perm you know we have…..and we checked it up and by Wednesday he said ring up to Vernon’s and try and find out. So I rang up from Berry’s and she said “Are you sitting down?” she says. Uumm and she said you’ve won Twenty Four Thousand something and in 1975/6, might have been a bit later but, em so that was good for all the… happy days, about Fourteen Hundred apiece. That was how I remembered how many worked there. Yea, you know, I think everybody changed their car, well most of them

It was a collective bonus, all the works got the same bonus, the sawyers, right from cutting the tree trunk to em, you know down to the upholsterers and packers and drivers, they all got the same bonus every week. It was worked out by how many were produced, certain models, they had a certain bonus, so it was all worked out like that. So we used to like these chairs that were called ‘crackerjacks’. They were…you could…I think what it was really the machine shop that called them ‘crackerjacks’ maybe it was because they made a really good bonus. They could knock them out and make a good, and every, we knew that when there were a few hundred of those were coming through one week it would be a good wage that week. You know so it was….that was the ‘crackerjacks’.

Berry’s, they always had an annual dinner dance, annual dance really at the Chipping Village Hall and like, all the workers went and their wives and Jack were usually there and Mr Berry, a really nice evening it was. I used to like going. We had a confectioners shop in Longridge at that time and as I say, I was a confectioner, baker and confectioner,  and we also did catering, out. Well, we did catering at the Chipping Village Hall and me mother & dad were there working with sandwiches and cakes and tea’s and all that and me mother came to me and she said hey, Mr Berry came ‘round, John, he says to me ,”Are your lads, he says, are they all working?, he said, if any of them want a job tell them to come up and I’ll find ‘em one” So that very nice to say, wasn’t it? to me mother you know, so we always used to get stuck in, you know, we used to work, that was basically it. So that were very nice. It stuck in me mind, she once told me.

George Lawrence used to do all the piping, what they called ‘hide and banding’. The backs of the chairs were upholstered…I actually finished up doing the backs. I don’t know who did ‘em after me, but I did the whole lot, they had a machine for just doing it and eh ..he used to just go round them with a staple gun, just one chap did that, you got that good at it.

It was hide and banding, when you stapled it, it closed up on the staple so you couldn’t see them yea but most of the things were studded, like stools and that, we used to knock the studs in individually.

I used to think, what a journey from Longridge to Chipping, five mile, it was the nicest journey to work you could ever find, wasn’t it. I can see them going down the motorways now and having to go into Manchester, M60, gosh I wouldn’t have done this. I used to go in seven or eight minutes and we were at Chipping, quiet roads between Longridge Fell there and all the Beacon Fell, it was a lovely journey, wasn’t it? I didn’t mind it at all.

I shot my finger once or twice with the staple gun, but it wasn’t so bad if you shot yourself through the nail you didn’t hurt. But if you did, you pulled it out with pliers quick. I always pulled it out quick, you didn’t feel it, the staples were only like a quarter of an inch long. A chap next to me, Harry Lowe, he were messing about like this and the safety thing said ‘Don’t play about with pneumatic things’ He come up to me like this, on my back and pulled trigger and it stuck in my backside. I said “Hey that stuck in!” I remember it now, it went in, I don’t think it’s done any damage through my clothes. He was a bit miffed, a bit upset about it. I said no it’s alright, I didn’t do owt ….sort of things like that. No the biggest accident was when poor Dick [Wareing] got killed. You know all about that. Yea, I often think about it.

I know a long time ago when they had power cuts, do you remember the electric strike? They’d power cuts. Well, of course, nobody else could work but we just went to the hammer and tacks. We could keep doing a certain amount, couldn’t we, keep doing them. And you know you just put them in every so far. It took a lot longer to do, obviously, but just bang them in. 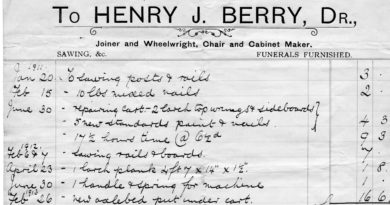